Steve is a conservative Republican who is pro-life and strongly advocates for Second Amendment rights in the State Senate. The American Conservative Union Federation presented Steve with an award for conservative achievement after they rated him as having the 5th most conservative voting record in the entire Illinois General Assembly in 2020. 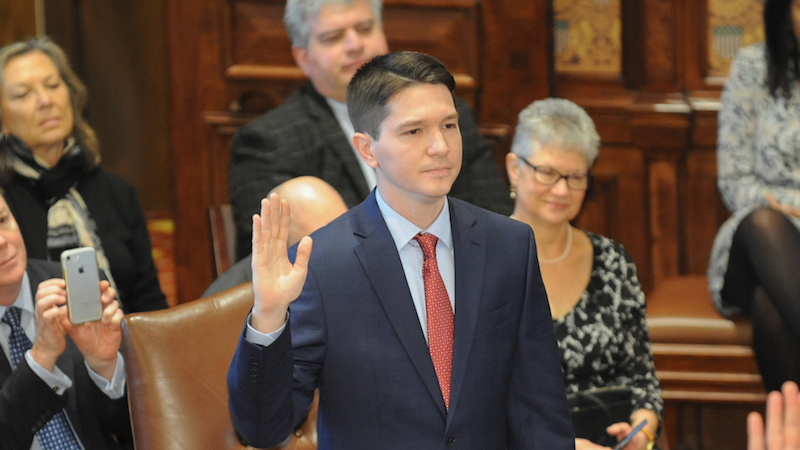 Steve McClure was sworn into office on January 9, 2019. Steve was born and raised in Springfield, and his family has a long history of public service. Both his parents worked in Illinois State Government, and his grandfathers served in the military.

Steve went to Springfield High School where he was a record-breaking wrestler. After graduating high school, Steve went on to attend college at Arizona State University, where he earned two bachelor’s degrees in four years—one in history and the other in political science.  After college, Steve returned home to attend the University of Illinois at Springfield. There he earned a master’s degree in political studies while working as a legislative intern for the Illinois Senate Republican Caucus. From there, Steve went on to obtain a law degree from Valparaiso University School of Law in Indiana.

After graduating from law school, Steve accepted a position as a prosecutor in the Sangamon County Juvenile Division. Steve would go on to serve as chief of the Juvenile Division and later served in the Felony Division. As a felony attorney, Steve prosecuted drug dealers, burglars, violent criminals, gang members, and perpetual thieves. Steve also focused on cases involving those attempting to take financial advantage of senior citizens. He also served as a member of the Lincoln Land Adult Fatality Review Team. The team investigates the abuse and neglect of vulnerable adults that passed away.

Steve resigned his position as assistant state's attorney to run for state senate in 2017. He was sworn into office in January 2019. Steve has since been appointed Assistant Leader and Assistant Floor Leader for the Senate Republican Caucus. Utilizing his years as a prosecutor, Steve is the leader for Senate Republicans on criminal issues and is the Republican leader on the Criminal Law Committee in the senate. Steve used his criminal law experience to lead the fight to remove members of Governor J.B. Pritzker's Prisoner Review Board who were releasing violent criminals from prison early. Steve's work helped to remove members of the Board and land Governor Pritzker his greatest legislative defeat. Steve has been able to defeat more Democrat bills than any other member of the Senate.

Additionally, Steve passed legislation to allow DCFS frontline workers to carry pepper spray for self-defense purposes. This legislation was in reaction to the murder of one of Steve's constituents who was a DCFS worker. Despite being in the super minority, Steve has also been able to pass bills to help with the public school teacher shortage, the COVID-19 student learning gap, and the bus driver shortage. He also passed legislation to protect citizens from internet exploitation and to provide more job opportunities for veterans.